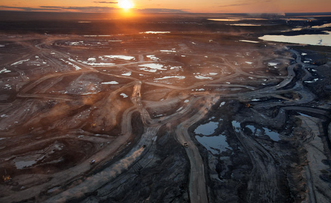 Oil Sands are deposits of sand saturated with bitumen (a thick, sticky form of crude oil). Oil is extracted from these oil sands and then goes through many processes to make toothpaste, cosmetics, fuel, perfume, sneakers, televisions, bubblegum, and other items.

Over the course of the last decade, Alberta, Canada has experienced extraordinary economic growth due to the rapid expansion of the oil sands industry. However, the growth of the oil sands has also lead to increased pressure on the environment all over Alberta and most importantly in the Banff National Park. 1.31 million barrels of oil are produced every day, and by 2018 production is expected to increase to 3 million barrels per day. More and more pressure is being put on the environment.

The impact in the Banff National Park will vary and work is currently underway to assess potential impacts. In order to ensure that temperatures don't rise too high and cause natural disasters, we need to lower the amount of carbon dioxide in the air.

Some people in Banff, Canada are polluting our homes, water, and air unintentionally with chemical-based cleaning products. Chemical-based cleaning products include most antibacterial cleaners, air fresheners, dishwasher detergent, carpet cleaner, and toilet/sink/tub/tile cleaners that contain toxic ingredients. When poured down the drain, the chemicals enter the water supply and end up in the Bow River in Banff's Boreal Forest.

To solve this issue people in Banff should get involved and spread the word around. Also, people should buy environmentally friendly cleaning products that won’t corrupt the water in the boreal forest.  Another source of chemical pollution are pesticides that are used outside protected areas (such as Banff) and are being found inside the protected areas. The pesticide toxaphene disrupts endocrine systems, damages lungs, livers and kidneys, and causes developmental disorders, cancer, and problems with reproductive and immune systems.


Research at Bow Lake in Banff National Park found toxaphene as well as DDT, PCB, CHL, Dieldrin, and HCH in some microrganisms and fish. Up to 181.5 nanograms  of toxaphene were found in H. atcticus (a plankton). This affects the whole ecosystem because the streams and rivers lead to and are fed by lakes. These rivers flow through the boreal forest, disrupting the ecosystem by contaminating the water source for animals. Also, if contaminated organisms living in the lakes or rivers are ingested by an animal, then the animal that ate the organism will die as well from the contamination.