Why the Land is Being Degraded

Land degradation is the reduction in value, health, and productivity of land through deforestation, soil nutrient depletion, overgrazing, and irrigation.

In the Banff region of the boreal forest, or taiga, land is being degraded. Land degradation is occurring in this area due exclusively to human activity. Recently, the Banff boreal forest is being degraded due to many reasons. Illegal logging, and clearing for agriculture and livestock are major examples of the deforestation that is taking place in the forest.  In fact, Canada in general, accounts for 90% of all logging activity, is the world's largest timber exporter.

Another cause of the land degradation in Banff is the various types of mining occurring. This includes mining for oil sands, coal, limestone, salt, shale, dimension stone, ammonite shell, sandstone, sand, and gravel. Mining is a major industry in Canada, there are 15 major mines and quarries in the country, 11 of which are oil sands mines. Oil sands happen to be the largest type of mining in Canada; Syncrude Canada operates the largest mine in the world. Although mining for sources of energy puts a large sum of money into the economy each year, it has very harmful effects on the ecosystem. The degradation is so widespread, only 35% of the northern Canadian boreal forest remains undisturbed.

How This Will Affect the Ecosystem 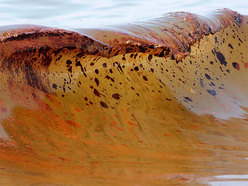 This land degradation will affect the ecosystem in several different ways. Mining may pollute the soil and water in the area due to the fact that there is a risk of the substance seeping into the soil as it is being extracted from the ground and leaking into lakes and rivers. It endangers water organisms encompassing the large array of fish in the area, including breeds such as trout, minnow, and cod. The polluted water supply could also affect the land organisms, ranging from weasels, to elk, causing them to become ill and die. Also, the oil that they drill can be used for cars, which produce air pollution. The polluted air from the cars could migrate over the forest/park and cause the area to have bad air quality.

Illegal logging could endanger and possibly eliminate the habitats of many creatures; many organisms live on trees and depend on them in order to survive. This could lead to a large reduction in population of multiple species, and possibly extinction. Logging would also lead to a larger amount of carbon and a lesser percentage of oxygen in the atmosphere: trees use carbon dioxide to make oxygen, and without as many trees, there will be more carbon dioxide, and less oxygen. Clearing  negatively affects the area by terminating organisms and their habitats.