There are various endangered species living in this biome, including:

Many of these species are endangered because of human activity, some of which include: 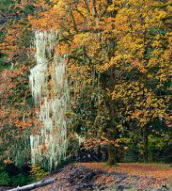 Methuselah's Beard lichen is a species living in the boreal forest in Banff National Park. It is endangered because of deforestation and pollution. Lichen is an organism that is made of fungus and usually hangs on the branches of trees. If a tree is cut down, the Methuselah's Beard is no longer able to sustain itself, and dies. Since 400,000 hectares are being cleared in the boreal forest each year, the lichen isn’t growing and spreading as quickly.

Methuselah's Beard is so sensitive to pollution that when the machines arrive to cut down the trees it is living on, the lichen also dies due to the emissions of the machine. The extinction of the Methuselah's Beard lichen will have a significant effect on the ecosystem. This lichen helps determine the air quality, so one can assume that with little to no lichen on trees, the quality of the air in the Banff National Park is very low. In the biome the lichen is not very populous due to pollution and deforestation. Methuselah's Beard lichen is an essential factor in the Banff region of the boreal forest because it contributes to good air quality. 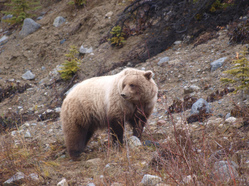 The grizzly bear is one of the main endangered species in the boreal forest in Banff National Park. In 2010, the grizzly bear population in Alberta, Canada is estimated to be around 691.

This endangerment is primarily because of human hunting. These bears are hunted for their meat and fur. This excessive hunting is causing the bears to be at risk of extinction. The grizzly bear is also endangered due to deforestation. 92,500 hectares of forest are being cut down each year in Canada. In some regions of the boreal forest, trees are lost at the same rates of trees in rainforests.

This makes it hard for the bears to hide from predators, like humans. These are the factors driving the grizzly bears into extinction. If grizzly bears become extinct then their whole food chain will be disrupted. Grizzly bears consume great amounts of moose, deer, sheep, elk, bison, caribou and various species of plants. Without the bears eating these species in the ecosystem, the prey will overpopulate. The grizzly bear is an essential factor in the boreal forest biome in Banff National Park because without it around to eat its prey, the ecosystem will become unbalanced.